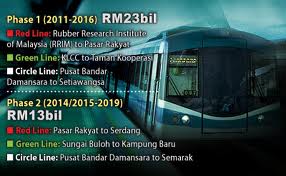 PETALING JAYA: Mass Rapid Transit Corporation (MRT Corp) has denied allegations that it had misled residents of Pinggir Zaaba in Taman Tun Dr Ismail, Kuala Lumpur, into believing their houses would be acquired for the MRT project.
“We deny the allegations that we misled the group, and the suggestion that they were unaware of the existence of a Special Compensation Committee (SCC),” it said.
Residents of Pinggir Zaaba had announced they would take legal action against MRT Corp, claiming that the company had led them into believing they would be compensated accordingly for their houses.   Read more ......
Posted by ss20pj at 2:26 PM