Furthermore, a minimart at Jalan SS20/11 was also robbed last night by parang wielding Indian men who came on 4 motorbikes. Police managed to arrest 2 robbers that they traced through a broken number plate found at the scene.

Residents, please be careful and stay alert!
Posted by ss20pj at 5:29 PM 2 comments: 
2. House break-in. Although gated and guarded in the Northern Zone but that did not stop intruders from breaking into a house in Jalan SS20/26. Happened at about 8:30 pm. Managed to get away with a safe and other valuables. 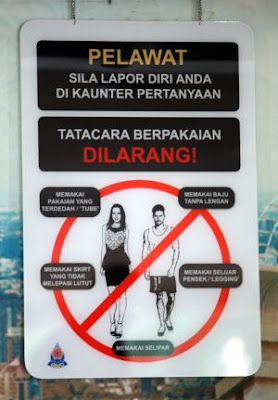 THE public visiting Petaling Jaya City Council (MBPJ) headquarters in Jalan Yong Shook Lin will now have to observe guidelines on dress code set by the council.
Women wearing strapless or sleeveless tops, short skirts (above the knee) and flip-flops will not be allowed into the premises.
Men are also not spared as those wearing singlets, short pants and flip-flops will be barred from entering the council building.
Last week, ahead of the seventh City Day celebrations, the council issued the guidelines, with graphics. Titled Tatacara Berpakaian or Dress Code, it illustrates the unacceptable attire.   Read more  ......
Posted by ss20pj at 1:04 PM No comments:

MBPJ advised to keep recruits to 50 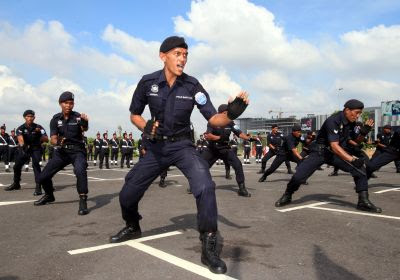 SMALLER is better — that was the Selangor Police Contingent’s (IPK) feedback on the formation of an auxiliary police force.
Petaling Jaya City Council (MBPJ) public relations director Haniza Abdul Hamid said the council had proposed 100 recruits for its auxiliary police application but IPK had advised the council to keep it to 50.
“Our third application sent on Wednesday mentioned 50 recruits for the pilot project,” said Haniza  Read more ,,,,,
Posted by ss20pj at 12:18 PM No comments:

"12:30am 23/06/13 we heard the shouts of "Tolong, police!".
Our neighbours were in the midst of being robbed of their handbags while returning to their house (Damansara Kim - Jalan SS20/8).
The robbers came in a Honda Jazz.
It was later told to us that the robbers had also wanted to take their car. Due to neighbours shouting at the robbers "Tolong. POLICE!" plus a few houses (including ours) turning on our house alarms - the robbers got back into the car and sped off.
3 police cars arrived 5-10 minutes later to attend to the situation." 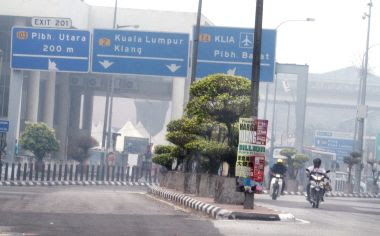 Haze can be seen on the road leading to Port Klang at about 1.30pm on Monday.

PETALING JAYA: Port Klang has taken over the tag of "most hazardous" district.
At 5pm, the Air pollutant Index (API) for the area rose to 319, putting it the hazardous category. The API has been close to the 300 range the whole day.
Visibility was poor as soon as one exited the Federal Highway in Klang, and many people were wearing masks.      Read more ....
Posted by ss20pj at 10:08 PM No comments:

THE haze in Malaysia has once again reached dangerous levels.

It has now left only 13% of the country with good air to breathe while many schools in Johor have closed as Malaysians there took in the worst of it, so far.
Yesterday, four areas in the state entered the “hazardous” and “very unhealthy” scales of the Air Pollutant Index (API).
Poor visibility at the Senai International Airport also forced two flights to be diverted.
In Kuala Lumpur, this Sunday's planned 2013 Olympic Day Run for 15,000 participants at Padang Merbok has been postponed, the co-organisers McDonald's Malaysia said.
The Department of Environment (DOE) said the country was on high alert due to the rapid deterioration in air quality over the past three days. It has alerted the National Security Council to activate the National Haze Action Plan nationwide, with a “3A Warning Level” (the highest level) issued for the worst-affected areas.      Read more ......
Posted by ss20pj at 10:27 AM No comments: 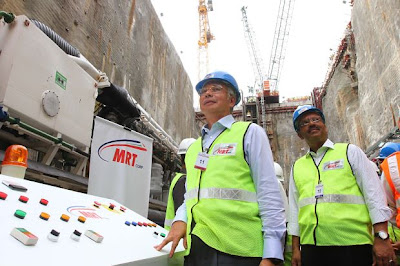 KUALA LUMPUR: The Klang Valley Sungai Buloh-Kajang MRT project is a landmark in the effort to transform the country into a modern and high-income nation, said Datuk Seri Najib Tun Razak.
The Prime Minister said the MRT was not only an important transportation project for the people of the Klang Valley and Greater Kuala Lumpur, but it would also signify Malaysia's shift to a developed country.
He said while there was excitement when the project was launched two years ago, some were sceptical whether it would get off the ground.
“Today, I am proud to say that the MRT project is on track and its construction on schedule.     Read more   ...... 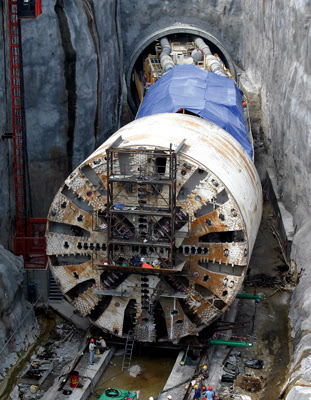 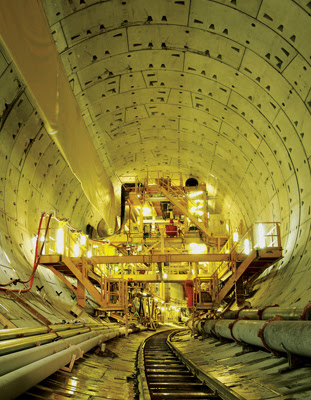 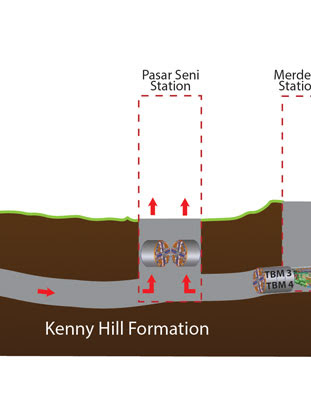 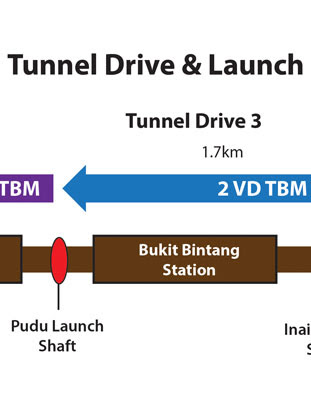 Police to conduct hourly patrols throughout the day at ATM locations

KUALA LUMPUR: The police will conduct round-the-clock hourly patrols nationwide to prevent break-ins at automated teller machines (ATM).
National Key Results Area (NKRA)chairman Datuk Wira Ayub Yaakob (pix)said motorbike and car patrol units will carry out the patrols and report to the district control rooms on an hourly basis immediately.
Speaking at the launch of Ops Tawan Bukit Aman at the KLCC shopping mall, he said the patrol units would be fully accountable for any robberies or break-ins during their shifts.    Read more ...........
Posted by ss20pj at 9:55 PM No comments:

THREE Petaling Jaya asssemblyman want the Petaling Jaya City Council’s (MBPJ) request to set up its own auxiliary police team approved.
Damansara Utama assemblyman Yeo Bee Yin, Bukit Gasing assemblyman Rajiv Rishyakaran and Kampung Tunku assemblyman Lau Weng San said there was a pressing need for extra police personnel.
They claim it was necessary based on public perception on the crime rate.
They added that it was also the wish of residents to see more police patrolling the streets.   read more  ......
Posted by ss20pj at 2:58 PM No comments: 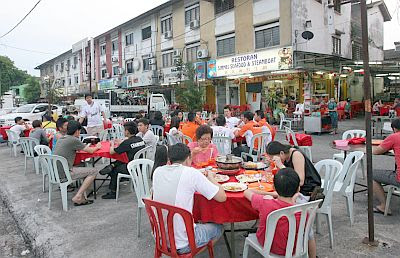 PETALING JAYA: Criminals have no fear of the police and are even daring enough these days to rob during dinners, weddings and funerals.
Tan Sri Lee Lam Thye, who is Malaysian Crime Prevention Foundation (MCPF) vice-chairman, said the criminals believe they won't get caught due to poor law enforcement.
“I feel we have lagged in terms of law enforcement that strikes fear in the hearts of the criminals,” he said.
Just days ago, a group of about 10 parang-wielding men held up several customers and the owner of the Simmei Seafood and Steamboat restaurant at Taman Taynton View in Cheras. Read more  ...........
Posted by ss20pj at 11:27 AM No comments:

Careful with your shoes 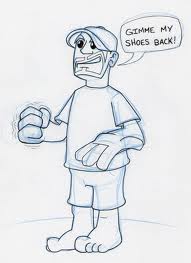 This is just to warn residents of SS20 to be careful with their shoes. My son had lost a pair of New Balance Sports shoes, Hush Puppies working shoes and a pair of Timberland boots between 12 midnight of 11 June to 6 a.m. 12 June and we live in SS20/13. Petty thieves are here again.

KUALA LUMPUR: A direct line to Bukit Aman, better-lit housing areas and safer shopping malls are among the thrusts of the Government as it goes on an all-out assault against crime. And that's not to mention the highly-visible police presence.
“The fight will be relentless to ensure that the people are free from fear,” declared Datuk Seri Najib Tun Razak when launching Pemandu's United Against Crime Day at the KLCC Park here.
Now, all emergency calls are directed to the police, Search and Rescue Department and ambulance services.
“Having a special line direct to Bukit Aman will enable the police to take immediate action,” the Prime Minister said.   Read more .....
Posted by ss20pj at 11:14 PM No comments: