SHOCKING: Petaling Jaya mayor to get to the bottom of land-zoning discrepancies as it is a serious offence to alter the document


CITY councillors were left baffled yesterday at the council's full board meeting when it was highlighted that there were two versions of the gazetted Petaling Jaya Local  Plan 2.
Petaling Jaya mayor Datuk Mohamad Roslan Sakiman said the council will look into the matter  as it was a serious offence if anyone had altered the official plan.

He said the plan which was printed for public distribution was different from the one approved by the state.

The  plan printed for public distribution by the council was different compared to the one which belonged to the Selangor Town and Rural Planning Department. Read more .....

PETALING JAYA: Less than 24 hours after Internet marketeer Chin Xin-Ci was nearly abducted at the car park of a shopping mall, two women were robbed of RM80,000 from the same place on Monday.
The two, who work at a Japanese goods store on the second floor of The Curve, wanted to go to a bank on the ground floor to deposit the takings for the past three days.
They were about to enter the lift at 10.45am when two men came by and threw curry powder at their faces before grabbing the bag containing the RM80,000.
The men, who were not wearing masks, escaped in a blue Proton Wira parked outside the mall. Read more ......
Posted by ss20pj at 11:39 AM No comments:

Email ThisBlogThis!Share to TwitterShare to FacebookShare to Pinterest
Labels: robbers, The Curve Shopping Mall, The Star

From this moment on, there were a few crucial things that happened that I think is the reason I'm alive today.

1. I managed to get into a position to escape.
When they got into the car, the Indian man had tried to force my body down onto the floor. I knew that the moment I'm on the floor, there would be no chance of escape. So I begged him to let me sit up. I promised him I wouldn't scream or alert anyone's attention. Thankfully, he trusted me, and let me sit up, gripping my arm tightly. Then I told him my arm really hurt and to please not grip it so hard. He loosened his grip.

2. I did not fight for the sake of fighting.
I was in an enclosed space, with no clear escape route. I would never win in a fight with these 2 guys, especially when they have sharp weapons. Had I fought from the get go, I may not have been in a position to escape. I might've even been knocked out cold, and God only knows where I would be right now.

3. I was lucky and sneaky.
I knew that the only way to escape, was to jump out of the car, even if it was moving. They had locked the car doors. So I leaned back, pretended to scratch my hair, and shakily unlocked the door I was leaning against. I'm so lucky they did not see or hear this!

4. I went 'crazy' at the right time.
And then I waited. I knew that the car would have to slow down outside the parking lot, as it exits to merge with the main roads. The moment it slowed down, I opened the car door and tried to make a run for it. I failed. I kicked my legs out of the car, but the Indian man had managed to pull my body back in. From this moment on, everything is a blur. I remember the Malay driver temporarily stopping the car, leaning over from the driver's seat and attempting to close the door and pull my legs in. At that point I remember thinking, "Even if I don't get out now, I need to keep the door open and my legs out the door. At the very least, it should cause a scene, and someone would see me. Or, the door might hit another car and they'll be forced to slow down." So I continued kicking. My right foot pushed against the wide-open car door to keep it open. I recall elbowing, struggling, kicking, and even biting. I lost my glasses, and was struggling blindly for my life. At some point the Malay driver yelled, "BAGI DIA LEPAS! BAGI DIA LEPAS!" (Let her go! Let her go!) and the Indian man loosened his grip. I made a jump out of the still-moving car, and ran for my life.

5. I acted in spite of the fear.
My friends said I was brave. But I didn't feel like it. I was quivering and shaking in fear. I was so afraid. I thought I was going to die. I was weak with fear and deathly afraid. I truly thought "this was it". But I knew I HAD to move. I had to run. Or there would be a worser fate in store for me. While I was quaking in fear, I forced myself to look around and see if there was any way I could escape, or even catch someone's eye.

6. I remembered the people I love.
The only thing that matters when you're faced with potentially horrendous fate, is the people in your life. When I felt the knife to my neck, the first thing I thought was , "This cannot be happening. I must be dreaming." The second? The people that truly matter to me flashed across my mind. It sounds cliche, but it's true. I thought of my parents. My brother. Khailee. Esther. More people. That's all I could think of for a few moments, before I thought, "Shit. I need to get out of here."

I ran towards the Maybank outlet at the Curve. There were plenty of people milling around. I screamed for help over and over again. I was hysterical. I grabbed an older Malay man by his shoulders and begged for help before practically collapsing at his feet.

I will always remember the relief and liberation I felt, running over Mutiara Damansara's manicured grass and into the crowd. 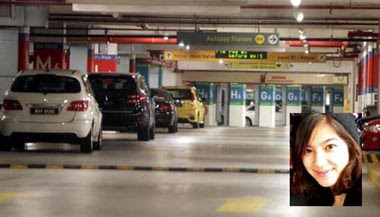 PETALING JAYA: An Internet marketeer had a close shave with a couple of would-be rapists when she was abducted from the car park of The Curve shopping mall here.
However, the feisty Chin Xin-Ci put up a fight and jumped out of the moving car just as it was exiting the car park.
Recounting the harrowing experience on her Facebook account, she wrote that she was loading her shopping bags onto the backseat of her boyfriend's car when the incident took place at about 5.20pm on Sunday.   Read more ........
Posted by ss20pj at 11:24 AM No comments:

You can stare down killer dogs

AGGRESSIVENESS: The killer dog attack on 74-year-old jogger Yip Sin Hua in Subang Jaya, Selangor, on Tuesday spooked many people and sparked discussions on the tendency of restricted breeds to kill. Dog trainers G. Siva and Shashi Kumar tell Tan Choe Choe that such aggression is not breed-specific behaviour 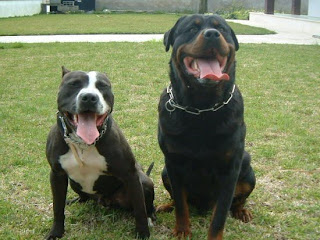 Question: If I'm a jogger, how can I prevent a dog from thinking that I'm running away like prey whenever I pass through? Do I stop and walk whenever I pass by the house?
Siva: You cannot stop at every house that keeps a dog. If the dog keeps on barking, you must warn the owner. The owner has the responsibility to keep the dog from harming others. But if the dog attacks you, try your best to face the dog.
The dog will not hang on to you if they're not trained. They're like wolves; they like to bite and jump back. Attack and withdraw.
On its own, it would not try to bring you down. As a pack, it may. In this case, I suspect the dog chased the jogger and knocked into him from the back, and the impact caused him to fall.  Read more ...........
Posted by ss20pj at 10:08 AM No comments:

Last night saw the launch of a pilot program of MPVs (moblie police vehicles) patrolling the Damansara area whereby they will stop occasionally to announce their presence through loudspeakers informing the public on how to contact the police. This is also aimed for a closer rapport between the police and the residents.


So do not be alarmed if an MPV stops right in front of your house. Feel free to approach the police if you need any information or have any questions.


Damansara Utama OCS Insp Zul was present for the launch and explained the objective of the program in the area.


It was also community policing night for the residents. Residents patrolled on bicycles and on feet while the police patrolled on motorbikes and police cars. They started the patrol from the Central Zone cabin to the Southern Zone cabin. Handy torchlights were distributed to the patrollers by the RT.


Our new councillor, Ir. Lee Suet Sen was also present to meet the residents. Residents are encouraged  to apply for the free LED lights from MBPJ.
The LED lights will be installed at the back of the house and is aimed at lighting up the back lanes. The lamps and installation cost will be borned by MBPJ while residents will have to pay for the monthly electricity bill which I understand will be less than RM2 a month.


Application form for the LED lights can be downloaded at the MBPJ website. 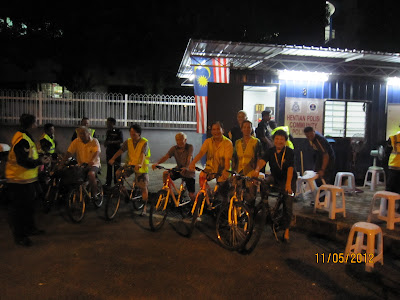 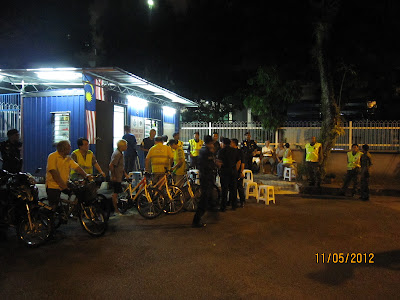 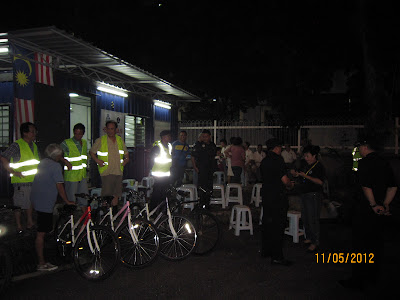 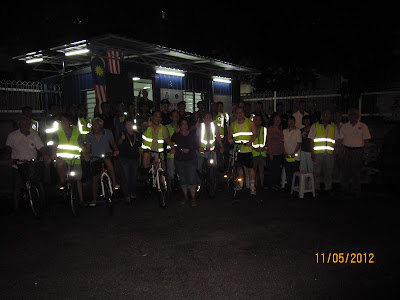 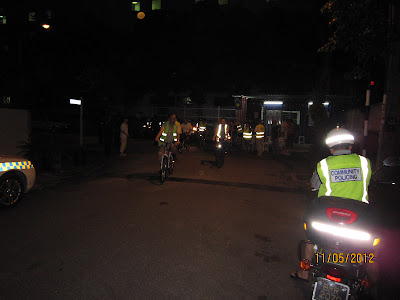 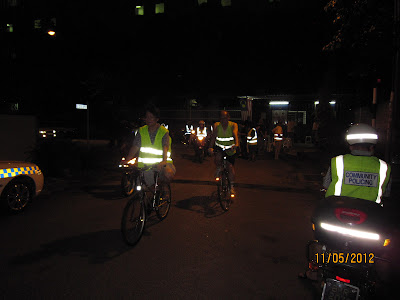 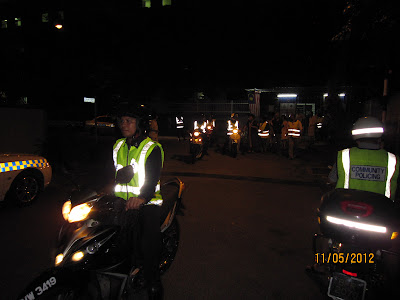 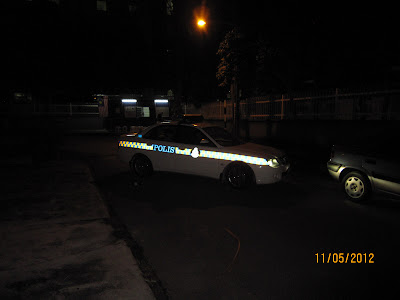 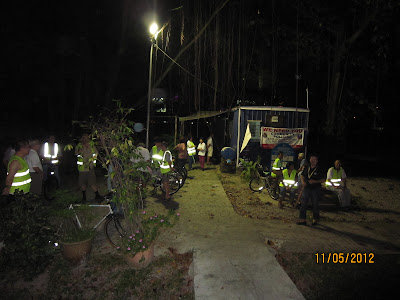 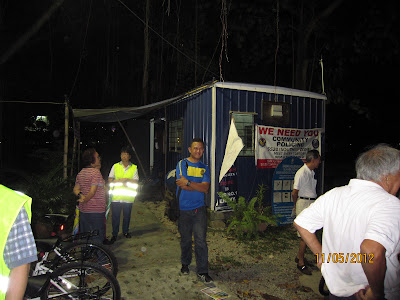 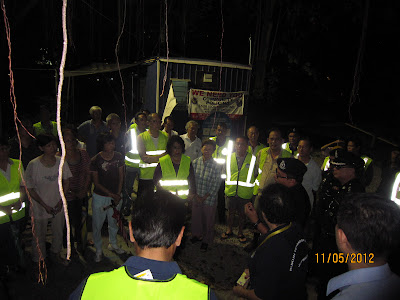 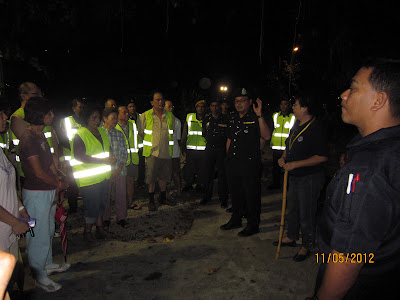 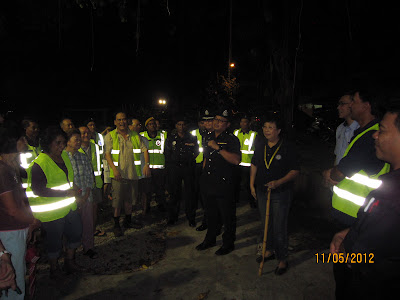 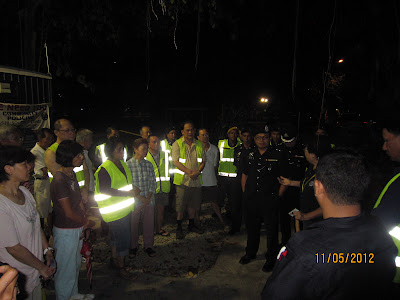 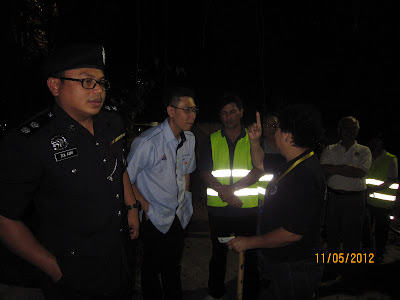 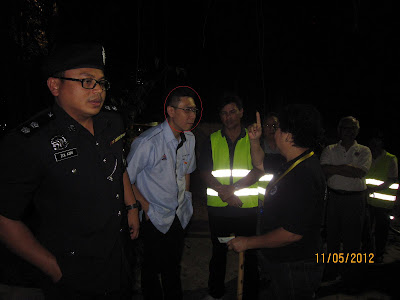 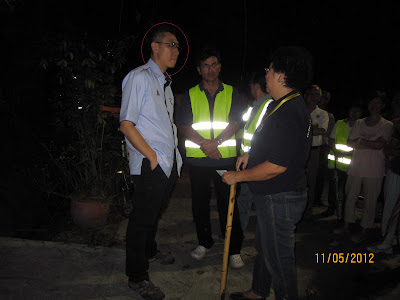 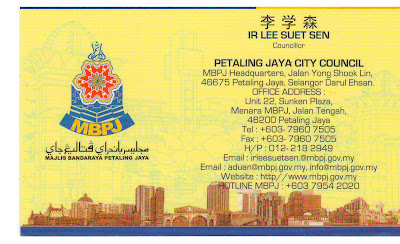 
PETALING JAYA: Nayati Shamelin Moodliar's family has again thanked the police for putting safety first in the rescue of their 12-year-old son.

"Men worked night and day to get him back," an emotional Sham Moodliar, Nayati's father, told reporters at a press conference on Friday.

Sham said that rather than work to apprehend the kidnappers, the police had joined the family on the ground to ensure Nayati's safe return.  Read more .....
Posted by ss20pj at 9:32 PM No comments: 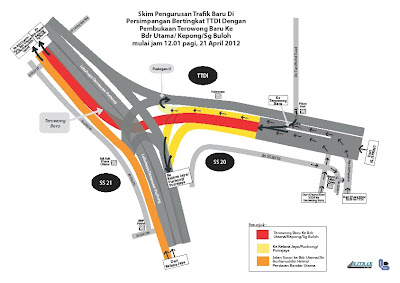 Lingkaran Trans Kota Sdn. Bhd. (LITRAK), the highway concessionaire of Lebuhraya Damansara-Puchong (LDP) would like to announce an opening of a new underpass at Taman Tun Dr. Ismail (TTDI) interchange.

Therefore, a new traffic management scheme will be implemented at the location starting from 0001 hours on 21st April 2012 (Saturday).
Posted by ss20pj at 2:56 PM No comments: 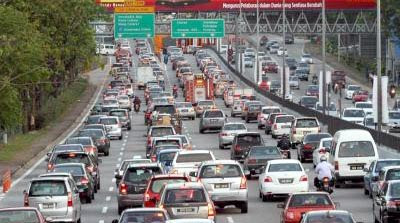 DAMANSARA Utama residents want the right turn near the TTDI Interchange reopened instead of using the new underpass and making a U-turn along the Damansara-Puchong Highway (LDP).


The residents are dissatisfied because the right-turn from the TTDI Interchange, which runs under an LDP flyover, had been closed thus denying direct access to their homes.


Furthermore, the new underpass leading to the LDP does not allow for traffic to enter Damansara Utama. Read more .....
Posted by ss20pj at 10:24 AM 1 comment: