Not very good news. There were 2 house break-ins.

1. SS20/10 (Northern Zone) - House break-in. Thieves broke into the house with knives when there were   still people inside the house.

2. SS20/15 (Central Zone) - House break-in. Nobody were in the house. Owner only knew of it when he came back from work.

It has been noticed that when it's nearing festivities like Hari Raya Puasa or Chinese New Year, there would be a spate of house break-ins, so let's be more vigilant and report anything suspicious to the police.

The Central Zone Security team members will be be patching up the holes with cement on the barriers caused by rust.
If you know of any barriers that need maintenance, you can contact them at the Communiting Policing cabin, SS20/19 anyday from 5:00 pm to 7:00pm.
They will also be very happy if you can join them in this maintenance exercise. 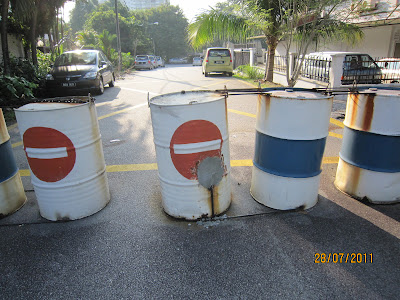 You should be seeing some police patrolling our neighbouhood on foot instead on motorbikes.
These are young police officers who are undergoing their practical training in SS20. They do not have motorbikes yet so they are patrolling on foot.
﻿﻿
﻿﻿
Posted by ss20pj at 2:02 AM No comments: 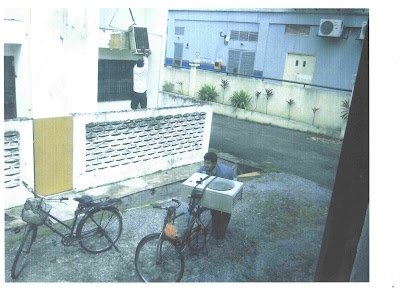 Police are on the lookout for these 2 guys. Looks like these 2 are not just going around SS20 collecting recyclable items. They stole the outdoor air-con units from a house behind Wisma TA recently while the owner of the house was not in.

One of these guys going around our area on his bicycle has just been released from jail in May.

The key to the 2nd Community Policing Cabin was handed over to the Police by SS20 RT Chairman, Eileen Thong, on Thursday night, 14 July 2011.
A small street party was held to mark the occasion.
The occasion was graced by the Petaling Jaya Assistant OCPD. Also present were Inspector Thomas Sulok, Sgt Major Jipa, Sgt Hamdan and also Mr. Mak Khuin Weng (SS20 councillor).
Police personnel on patrol will stop by at the cabin from time to time. Residents are encouraged to drop by and speak to the police on security and social matters or just have a friendly chat over a cup of coffee with them.
No. 8, Jalan SS20/19
Inside cabin

Group photo before ending the night
Posted by ss20pj at 2:54 PM No comments:

1. A Toyota Hilux which was reported missing at SS20/10 has been found in Puchong ...


2. The metal gates for the TNB substation in the Northern Zone have been stolen by metal thieves.

How to seal a bag and make it air-tight

Cut up a disposable water bottle and keep the neck and top, as in photo.

Insert the plastic bag through the neck and screw the top to seal and you have an air-tight bag!

Security update for the past week:

A brief update on the Community Policing Cabin at SS20/19.

The cabin is almost completed.
Piped water is already available at the wash basin inside the cabin. Electricity supply has not been connected yet pending installation of meter by TNB.
There was a 'soft launch' of the cabin last night and some residents and police personnel tried out the new coffee bar in the cabin.