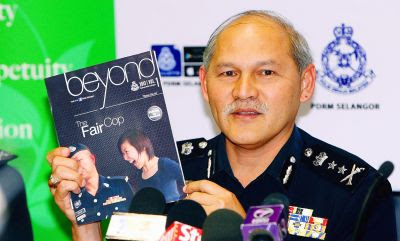 Crime prevention tool: DCP Tun Hisan speaking to the media after launching the e-mag called ‘Beyond’ at Sunway University.
PETALING JAYA: The creators of the MyDistress app have come up with a free e-magazine which gives tips on crime prevention.
Selangor police chief Deputy Comm Datuk Tun Hisan Hamzah launched the e-mag Beyond yesterday.
“The printed version of Beyond was published in 2011 but because of cost constraints, distribution was limited.
“Now that it is available as a smartphone app, the readership will be wider, not only in Selangor but across the nation,” he said after attending the launch and a campus policing event at Sunway University here.
“It is a norm for each police district to have a bulletin on its events and happenings but we wanted to try something different.
“Readers can not only learn about crime and criminal behaviour but also tips on how to avoid criminals,” he said.     Read more ......
Posted by ss20pj at 11:42 PM