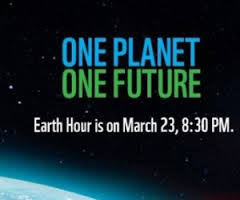 KUALA LUMPUR, March 22 (Bernama) -- Tenaga Nasional Bhd (TNB) has urged the public the reduce their electricity usage during the Earth Hour celebrations here tomorrow.
Vice President of Corporate Affairs and Communication Adelina Iskandar said since 2009, about 306 megawatts (MW) have been saved during the one-hour campaign, with 203 MW in 2010, 130 MW in 2011 and 105 MW last year.
"We have noticed a drop in electricity saved during the one-hour celebrations, and we hope the public will continue to play their role in supporting the campaign," she said after launching the TNB-WWF Malaysia Earth Hour 2013 awareness campaign here today.
Themed "I will if you will," the Earth Hour invites individuals, businesses, governments and communities to switch off their lights for one hour tomorrow (March 23) from 8.30pm to show their support for environmentally sustainable action.
"We are encouraging the public to plan their daily usage and try to do their house chores using electrical appliances during off-peak hours," Adelina added.
Posted by ss20pj at 4:21 PM