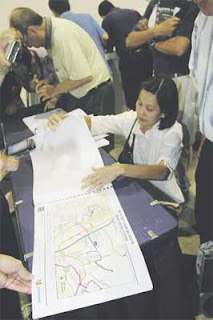 People having a closer look at the route map of the proposed Sungai Buloh-Kajang mass rapid transit line. — NST picture by Syed Abdullah Syed Nordin
KUALA LUMPUR: About half of respondents agree that the first proposed mass rapid transit line from Sungai Buloh to Kajang will save time, cost and reduce congestion while the other half say it will cause noise, dust and floods. Some of the respondents also wanted to know if they would be resettled. The findings of the environmental impact assessment (EIA) report was released yesterday by the Department of Environment.

The survey, by ERE Consulting Group Sdn Bhd, had interviewed 700 residents in the affected areas.

The EIA further reported that 473 lots of land would likely be acquired for the Sungai Buloh-Kajang (SBK) Line.