The proposed MRT line and its stations is as shown in the map below. 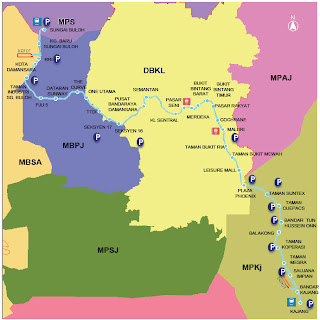 From the map, the proposed 35 stations are:

- The Sg Buloh-Kajang MRT Line is the first of at least 3 MRT lines being planned, with a total length of 150km.
- Estimated total costs of three MRT lines is at least RM36.6 billion.
- The first phase is scheduled for ground breaking in July 2011 and fully operational by 2016.

- The whole MRT project is expected to create 130,000 jobs.
- The implementation is expected to generate Gross National Income of between RM3 billion and RM4 billion beginning 2011 until 2020.
- By 2020, the MRT is expected to carry 2 million riders, serving over 11% of total travel across and 64% of travel in and out of KL City Centre.

Sg Buloh-Kajang MRT
- Estimated to be between 60km to 65km in length.
- 35 stations, with 11 of them incorporating park-and-ride facilities.
- Population catchment of 1.2 million, with estimated daily ridership of 442,000.
- Between 9.5km and 10.5km of the length will be underground.
- The portion that passes through densely populated area such as Damansara and KL Central Business District will be underground.
- A ride from the first to the last station will take approximately 90 minutes.