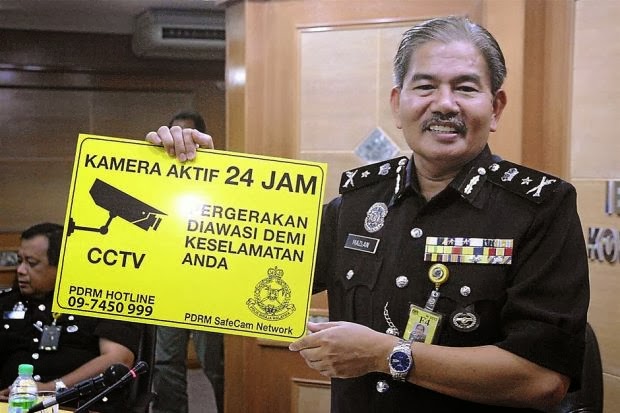 DCP Mazlan Lazim showing the ‘Safe Cam’ sign to be posted at premises during a briefing at the police headquarters in Kota Baru. — Bernama

KOTA BARU: Police have sought the cooperation of 20 government and private agencies in the state to tackle crime via closed circuit television (CCTV).

Kelantan deputy police chief Datuk Mazlan Lazim said under the Safe Camprogramme launched last year by the Home Ministry, owners of premises with CCTVs could assist the police by letting them have the recording of crime incidents in their area.
“We called them today for a briefing on the Safe Cam programme before initiating a memorandum of understanding with them on crime prevention.
“Among the advantages of being in the programme is that police will be patrolling their area more frequently,” he said in conjunction with the briefing at the state police contingent headquarters here yesterday.
The Safe Cam programme is an initiative under the 1Aman-United Against Crime campaign listed in the government’s transformation programme to reduce crime. — Bernama
Posted by ss20pj at 1:57 PM